Baritone completed his singing and piano-studies with Maestro Alberto Soresina (1911 – 2007) at the Scuola Musicale in Milan, Italy.
In 1989 he made his debut as an interpreter of sacred music in Messiah by G. F. Händel, in Johannis Passion and in the cantata Christ unser Herr zum Jordan kam (BWV n° 7) by J. S. Bach, in Milan. He has continued since the middle of the 1990s as an interpreter of sacred cantatas by J. S. Bach, oratorios by G. F. Händel and Masses by W. A. Mozart in many German and Austrian towns, from Freiburg to Leipzig, from Berlin to Salzburg. He has approached again to the sacred music in 2005 with the oratorio Theodora (Strasbourg) and in 2008 with the Belshazzar by G. F. Händel, with the Stabat Mater by A. Caldara, and the Stabat Mater by G. Rossini (Paris). 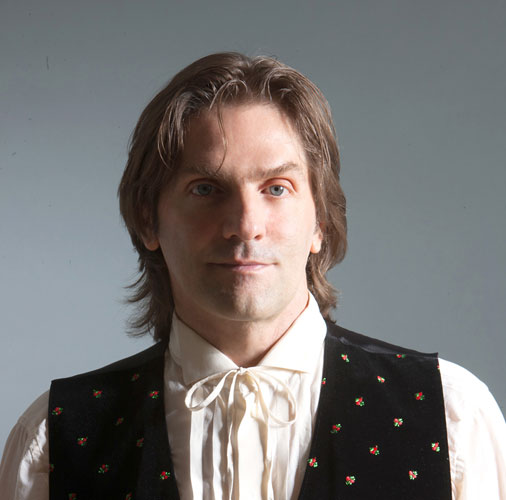 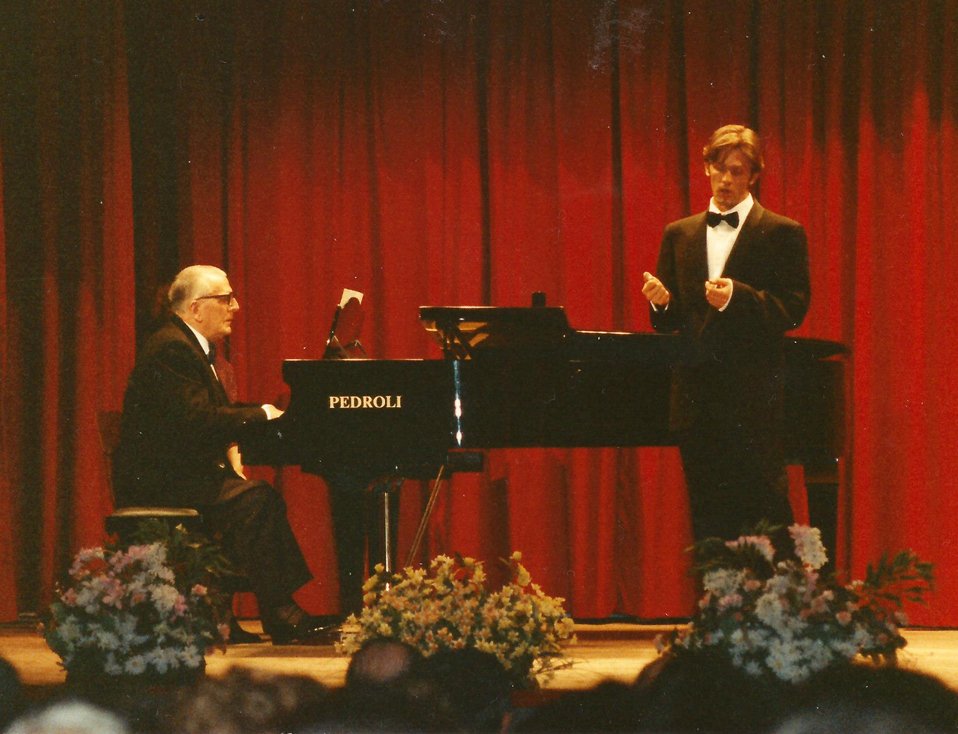 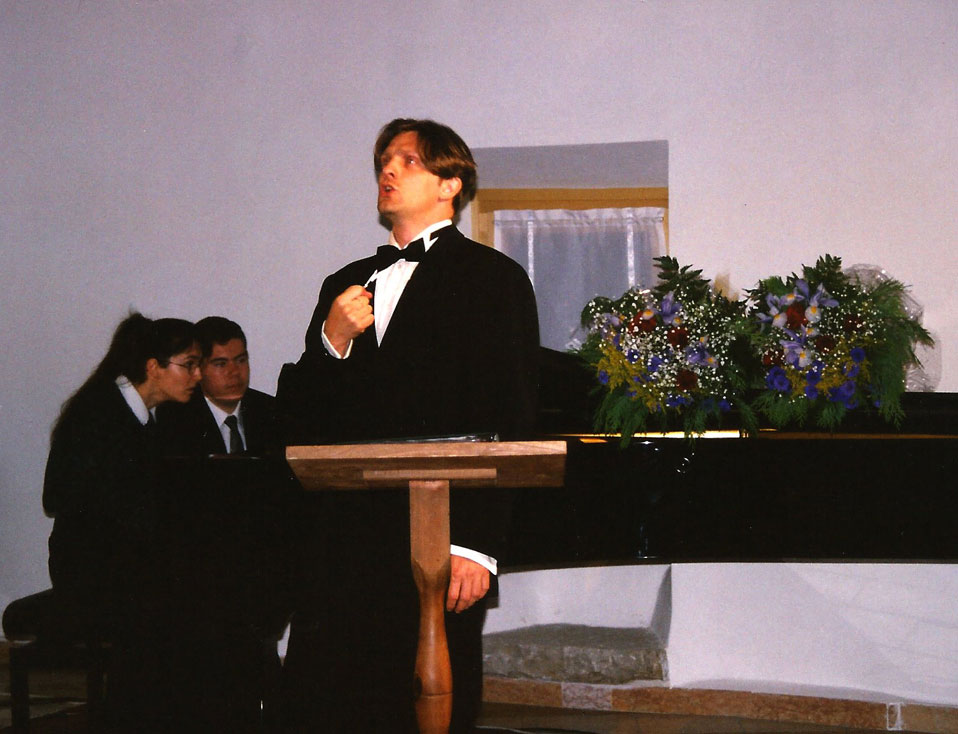 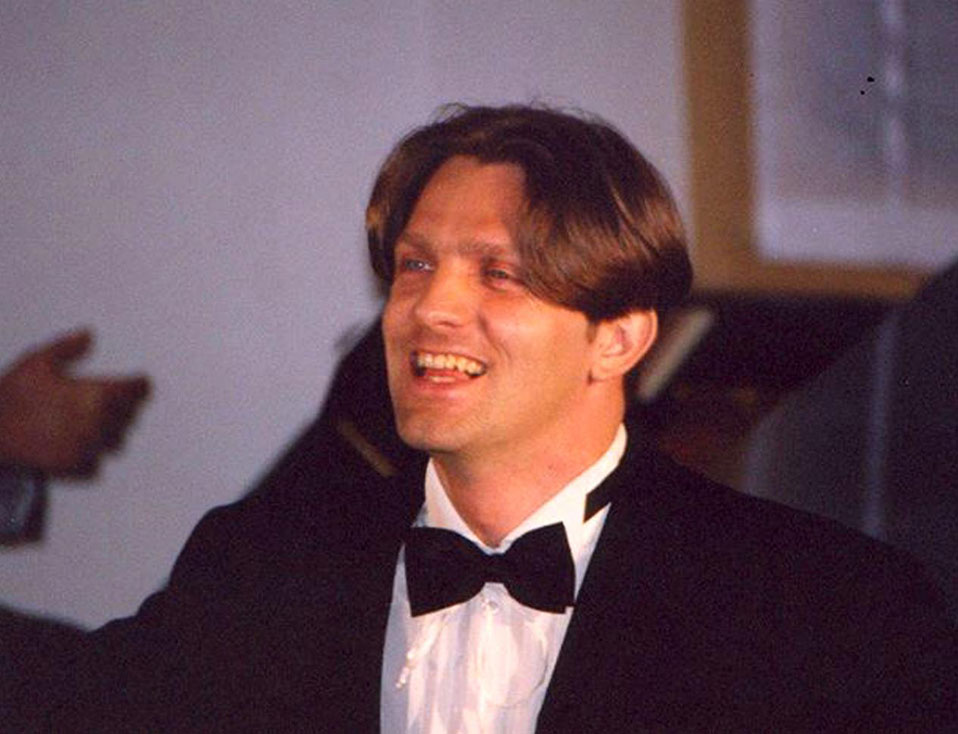 He made his debut in theatre in 1992, in the Italian première of Mass by L. Bernstein with the Orchestra dei Pomeriggi Musicali in Milan, conducted by Maestro Giuseppe Grazioli, at Teatro Smeraldo in the Lombard chief town. Performances in stagings of Italian baroque operas have followed in Germany, Belgium, Low Countries, Switzerland, Sweden, Spain, France and USA. The most important experiences in this repertoire: Riccardo in Il trionfo dell’onore by A. Scarlatti (Bruxelles,1995); Marco Aurelio in Marco Aurelio and Pisone in Alarico by A. Steffani (Antwerpen, 1996); Varo in Ezio, Pallante in Agrippina by G. F. Händel (Halle, 2000); Eupatore in Mitridate Eupatore Armindo in Gli equivoci nel sembiante and Corrado, Principe di Puglia, in Griselda by A. Scarlatti (Washington, Boston, Baltimore, San Francisco, Seattle and Los Angeles, 2001); Armindo in Parthenope (Chicago, 2003), Bajazete in Tamerlano (Drottningholm, 2004/ 2005), Melisso in Alcyna (Paris, Berlin, 2004/05), Garibaldo in Rodelinda (New York, 2004/ 2005), Thoas in Orest (Berlin, 2006/07), Il Sacerdote della Dea Minerva in Theseus (Berlin, 2008/09) by G. F. Händel; Hydraot in Armide by Ch. W. Gluck (Berlin 2009/100).

At the same time as the baroque and classic repertoire he made his debut in Berlin as his first Verdi role, in December 2001: eponymous role in the 1847 version of Macbeth followed by the role of Francesco, Conte di Moor, in I masnadieri (Paris, Liège 2004/ 2005), and followed by Simon Boccanegra in the title role, in 2008.

He has performed the Prince Afron in Золотой петушок (The Golden Cockerel), by Rimsky – Korsakov, and he has been Pelléas in Pélleas et Mélisande by C. Debussy (Berlin, 2005/ 2006).

He is also interpreter of V. Bellini and G. Donizetti opera: among his best performances of the two composers’ opera we mention Torquato Tasso (Düsseldorf, 1999), Don Pasquale (Berlin, 2010), and I Puritani (Praha, 2001).

He has been dealing with G. Rossini theatre these years, performing Geronio in Il Turco in Italia (München, 2007) and Dandini in La cenerentola (London – Barcelona, 2007/08 and 2009).

In the season 2006/ 2007 he had his first South American tour, and he made his debut in Miami (USA) in a Mahler programme.

He supports the theatrical and concert activity with an intensive work of theatrical and record producer: since 1994 he has published about thirty recordings for Centaurus Music, among which the World Première Recording of the opera by A. Steffani, Alarico (in 2004, and second edition in 2009 by the labels Concerto-Naxos) and a highlight from Marco Aurelio (2012 – World Premiere Recording), directed above all to the re-discovery and re-proposal of the cantata, sonata, operatic repertoire of the Italian sixteenth and seventeenth centuries, dedicating careful monographies to baroque composers as A. Scarlatti, A. Steffani, G. Legrenzi, A. Cesti, B. Marcello, G. B. Bassani, A. Stradella, G. M. Bononcini, N. Porpora, G. Ph. Telemann or later baroque/classic componists as G. B. Martini, J. Haydn, G. B. Cirri. He has recorded two G. Donizetti recitals (a 2000 live recording remastered and released in 2013 and a studio album in 2015), remastered a 1999 and a 2002 studio albums the both dedicated to the A. Steffani’s Duets (2013), remastered a 2005 production dedicated to J. Ireland and Benjamin Britten (2014), and produced a Rossini recital (2015).

He busies himself in record an in concert with mélodies and lieder by H. Berlioz, C. Debussy, A. Roussel, F. Schubert, G. Mahler, C. Saint-Saëns, J. Massenet, M. Ravel, R. Schumann, R. Wagner and others.

For the Season 2016-2017, Mozart and Wagner apart, Casagrande will debut in Les Huguenots by Giacomo Meyerbeer (Le comte de Nevers), L’incoronazione di Poppea by Claudio Monteverdi as Seneca and Orfeo, by the same composer, in the role of the title.

he 2017/2018 season, in addition to the usual Wagnerian and Mozartian roles, includes three debuts: Lord Guglielmo Cecil in "Maria Stuarda" by G. Donizetti, Cadmo, Tebe's King in "Semele" by G. F. Händel, and Don Alvaro in "Il viaggio a Reims" by G. Rossini.

In the course of the 2018/19 season the baritone faced for the first time L. Janacek (1854 - 1928) in Příhody lišky Bystroušky (Das schlaue Füchslein), in the role of Der Förster, he dealt with the artistic direction and production of Poro, re dell’Indie by G. F. Händel, and added Der fliegende Holländer to his Wagnerian repertoire, in the title role. In 2018, among other record works, he produced and published a second CD dedicated to G. Rossini, and in 2019 an anthology from Alarico il Baltha (1687) by A. Steffani, already produced and released in two complete world premiere editions.

In the 2019/20 theater season are planned the debut in the role of Pentheus in Die Bassariden by H. W. Henze (1926 - 2012) and the one in the role of Amfortas in the Wagnerian Parsifal, in addition to the numerous Mozart and Händel plays.